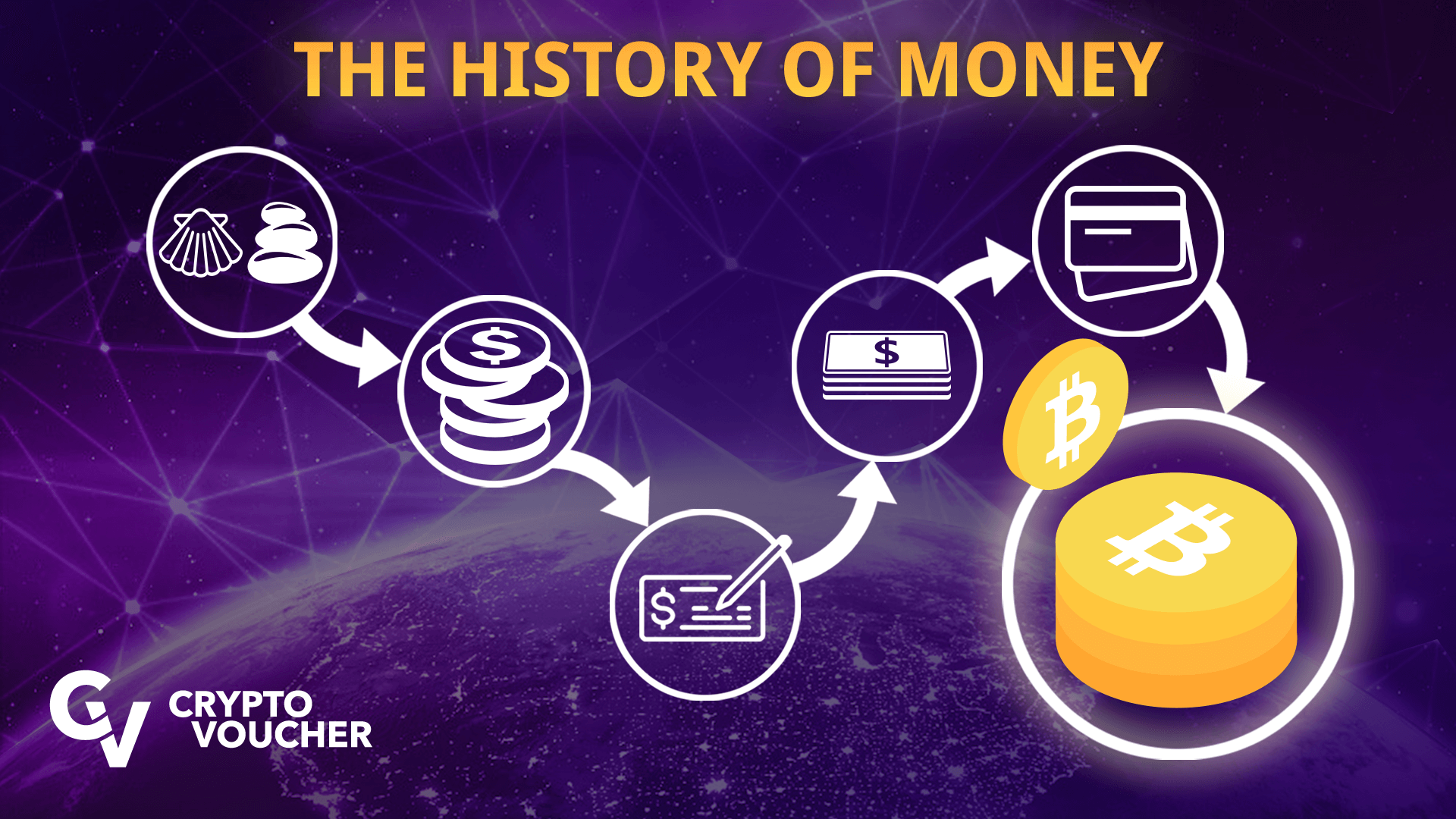 From shells to virtual coin – the history of money

Money is an integral part of our life. It’s something that existed before we were born so we treat it like something obvious, something that had existed forever. Of course, that’s not the case and today we will analyze how did humanity go from rocks through paper up to virtual currencies. Every step was driven by the need for more convenient solutions, rocks were too primitive, coins too heavy, banknotes lost to credit cards. The newest form of money is cryptocurrencies and it seems they’re staying for good.

How did money first start?

Back in ancient times, there was no such thing as money. If you wanted to have something that belonged to someone else you could steal it (not recommended) or trade something you had. Someone has wheat you need? Give them a chicken and make a deal. There was a major problem with this system though. What if the wheat owner was a vegan? I mean, there were no vegans back then since lack of food forced people to eat everything edible without exceptions, but you know, we can make assumptions here. So, a vegan would never accept chicken but you don't have anything else to trade. The only solution is to find the 3rd person that accepts chicken for something a vegan person would actually take. This way, we sell chicken, get that thing, and go to the wheat owner.

The whole process might be really inconvenient, especially when you need to visit a few people making the purchase process more like a chain of trades. People needed something simpler, more comfortable to use. Because of that, they invented something that nowadays we call money.

What was the first type of money?

Different historians and archaeologists have different opinions on which coin was the very first. Some civilizations used things that had value by themselves (like tool parts), others went for rocks or cowry shells. It's the root of many arguments so let's not discuss it here. However, they mostly agree that the first man-made coin was made in Mesopotamian civilization, around 5000 years ago.

For us, it is something so obvious we don't treat it as a big deal but back then, it was a revolution. Small, round things you can trade for anything in the country, without having to carry livestock or plants - how cool is that? Obviously this solution wasn’t perfect, the coins are not weightless so the more you got, the more difficult it is to travel with them. People had to take another step.

How long have checks been around?

Different countries developed different currencies but all of them had one thing in common - coins were made out of metal. As you imagine, it could get really heavy as someone got richer. But what if you could carry not the money themselves but the guarantee that you have them? You give your coins to the institution called bank and they give you a special note. On that note, they put the information on how much money you stored at their vault.

Now, instead of taking a few kilograms of metal, you hide that note in your pocket and trade using it. The person you paid can simply go to the same bank, show them that note and get "real" money - coins. This invention took place in the 17th century in the United States and got the name "cheque" or "check". Checks are still used in some countries but most of the world is used to carry other kinds of paper pieces, with a predefined value. You most likely have some in your wallet right now!

When was paper money invented?

From checks described above, there was an easy way to realize that we could just abandon metal coins at all and start to trade using just paper notes. Let's call them "banknotes" from the name of institutions who make them and we have money we still use today. This kind of "payment method" is actually pretty young compared to others - it has been developed just around 100 years ago. We got light, easy-to-carry money, but we can do even better.

When were bank cards introduced?

People often refer to them as "plastic money". Credit/debit cards were invented in the 1950s and are really convenient, multi-use, personal proofs of having some amount of money. You use them at shops by putting it close to the terminal so the device can scan them and tell the cashier if you can afford to buy what you want to. Light, waterproof, tiny bank-account-access cards that allow you not to think about carrying all the money you need.

Almost perfect except they require you to completely trust the institutions. You have effectively no control over your own money, what if the bank decides to lock your account? You cannot do anything if they don't allow you to. For convenience, there is a price in the form of security unless... something new takes their place.

Why Bitcoin was created?

Transactions happening within a couple of minutes, no need to trust anyone, full control over your funds, seems like we're close to what we can call a perfect kind of money. There is no need to worry about security, in fact, the only disadvantage is that you need to have internet access to pay. However, with growing and being constantly developed infrastructure, it becomes a smaller concern every year. The Bitcoin is considered the future of currencies but we need to take into consideration that there are many other cryptos, such as Ethereum. Every currency is designed to serve a specific purpose, if you want to learn more about BTC/ETH differences, we described it here.

The Bitcoin and Ethereum networks are not perfect and sometimes the users complain about the lack of some functionalities. Because of that those projects are constantly developed and improved. The Bitcoin will get lightning, the Ethereum will have its security increased.

The main disadvantage of cryptocurrencies used to be the fact that it wasn’t particularly easy to buy some of them. Luckily, nowadays there are companies taking care of the hassle. Crypto Voucher is not only one of them but we also offer something unique – codes that can be treated as “crypto gift cards”.

The cryptocurrencies are getting more and more popular, slowly becoming considered normal money for everyday use. There is not even a shadow of the initial fear of the unknown. We are happy to see the crypto industry constantly growing.

Will money exist in the future?

We, as a humanity went through a long way. Our modern payment methods, the ones we use not even thinking deeply about them, would be unbelievable to someone living not even a hundred years ago. The speed of changes is incredible, especially in 21st century.

Despite many concerns, banknotes, and coins are not likely to stop being used. They’re probably going to lose some market share but people will not abandon them so easily. But how will the ordinary coin look like in the future? Nobody knows but it's always better to have some crypto just in case so don't hesitate and buy it now on our site!